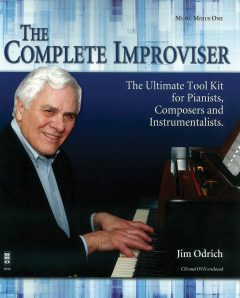 You are viewing: The Complete Improviser – The Ultimate Tool Kit for Pianists, Composers and Instrumentalists

The Complete Improviser – The Ultimate Tool Kit for Pianists, Composers and Instrumentalists

After graduating from Queens College in New York, Jim auditioned for and joined the prestigious Airmen of Note at Bolling Air Force Base in Washington, DC for a 4-year enlistment period as pianist/arranger. The depth of experience gained here could not have been realized so quickly anywhere else. It was a veritable laboratory for perfecting both playing and arranging skills. Opportunities for creative experimentation were plentiful. Where else could one write arrangements and have them immediately played by some of the best players in the country? Members of the band included stellar performers who later achieved great success on the professional music scene. Sammy Nestico, Tommy Newsom and first-call New York saxophonist Walt Levinsky were just a few among these. At the end of this four-year hitch, Jim returned to New York. In the ensuing years, he earned a masters degree and doctorate at Columbia University while continuing to write music for commercials and recordings, study with top composers and perform as pianist for recordings and live performances. It was a time when money was no object in setting budgets for national radio/TV commercials and industrial films. To cite just one example among many others, Jim had forty players in the studio for a national spot that he wrote for Chevrolet featuring the Fifth Dimension. There were also recording sessions in Los Angeles. Notable among these was a two and one half minute Canada Dry TV spectacular featuring Ann Margret with a cast of thirty dancers, for which he composed and conducted his own original music. Most recently, he has served as Director of Music Technology at Five Towns College in Dix Hills, NY. FTC, noted for its excellence as a music education institution, has awarded honorary doctorates to Elmer Bernstein, Clive Davis, and many other notables in the music industry. While there as Professor of Music, Jim conducted music workshops for students and wrote original scripts complete with vocal and instrumental arrangements for shows attended by the public. He also hosted a series of fifteen TV interviews with composers of the twentieth century and/or their heirs. Among others, these included Charles Strouse, George David Weiss, Ervin Drake, the sons of Hoagy Carmichael and Edward Eliscu, and wives of Frank Loesser and Jule Stein. Jim has also produced a number of piano recordings for Music Minus One, complete with accurate transcriptions for pianists to study. The inspiration to write this book came from the realization that there was no current method that presented the essential piano improvisor’s tool kit in an integrated, carefully planned step by step building-block sequence from beginning to end. The Complete Improviser sequentially presents, chapter by chapter, the authentic tool kit of musical devices used by top professional pianists. Each time a new devi

Be the first to review “The Complete Improviser – The Ultimate Tool Kit for Pianists, Composers and Instrumentalists” Cancel reply